Posted by bookstok in Books to Cinemas on January 1, 2011

Ever since popular mainstream cinema took hold over the collective fancy of book readers and general public, there have Hundreds of books to movie adaptations. Most of the time the central core is lost in translation and very rarely a seminal piece of work emerges that holds it own when compared to the source material. 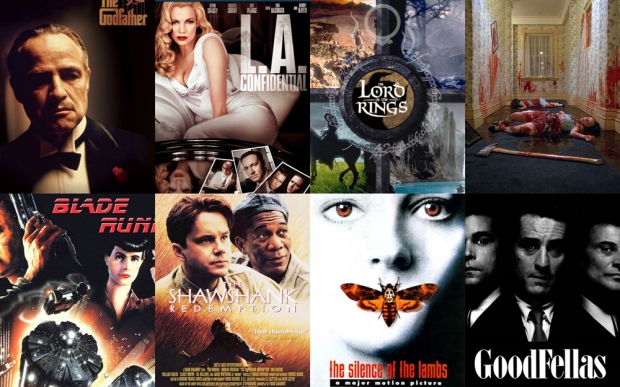 1) The Godfather: Adapted by Mario Puzo himself into a screenplay directed by Francis Ford Coppola The Godfather is much imitated by never matched for its formidable storytelling and cast about the The Corleone Family. Each of the characters written in the book or adapted left an indelible mark on moviegoers across the world.

Most memorable line – I’m gonna make him an offer he can’t refuse.(Don Vito)

2) 2001: A Space Odyssey: Spellbindingly original. This collaboration between Arthur C Clarke and Stanley Kubrick  delivered a movie masterpiece that takes the viewer on a journey like never before. Across galaxies, through thousands of years of evolution leaving us to interpret and question our existence in this universe.

Most memorable line – Just what do you think you’re doing, Dave? (HAL)

3) LA Confidential: Adapted from James Ellroy’s crime saga about Hollywood, bent policemen, wily politicians and men and women on a path to destruction presented America’s lurid side in all its glory. Ellroy’s staccato prose delivery and a twisted look at Hollywood’s deepest secrets made this a must read. Matching his brilliant theme was the film with a stellar star cast of Russell Crowe, Kim Basinger, Guy Pearce and James Cromwell. LA Confidential was noir at its best.

Most memorable line: Off the record, on the QT, and very hush-hush

4) Lord Of The Rings: A true epic that needs no introduction for a book lover. JRR Tolkien masterpiece about the Middle earth was as brilliant as they come. An entire world created of unforgettable characters and a journey that tests the will, courage, love and goodness inside. Peter Jackson and team converted the 1000 plus pages tome into a nine and half hours film and retaining the essence of the book and took us on an unparalleled journey that kept us engrossed from the first scene to the last.

Most memorable line: My preciousss!!!!

5) The Shining: The only horror film/book in this list from the prolific Stephen King who was in top form in the late seventies and eighties. Played by Jack Nicholson and masterfully directed by Stanley Kubrick is about a family of 3 who become caretakers for a lodge in the winter. The horror in the book and the film creeps up slowly and at the most unexpected places and set the stage for some amazing interplay of horror among the lead characters.

Most remembered: Nicholson for his crazily whacked out performance

6) Blade Runner: Philip K Dick’s works have been adapted by Hollywood many a times with some memorable results but non matched the tour de force that Ridley Scott brought to Bladerunner. The charismatic Harrison Ford plays Deckard a Bladerunner someone who hunts down replicants who hunts down human like robots who have outlived their use. Science fiction to bring on the screen requires great vision and style which Mr. Scott has in plenty. Here he creates a dystopian world bleak, perennially raining where the lines between human and non human have blurred leading to an unforgettable finale.

Most remembered: Harrison Ford as Deckard

Most memorable line: I’ve seen things you people wouldn’t believe. Attack ships on fire off the shoulder of Orion. I’ve watched C-beams glitter in the dark near the Tannhauser Gate. All those moments will be lost in time, like tears in the rain. Time to die.

7) Shawshank Redemption: One of the best stories written by Stephen King and it’s not horror but about hope. A young and successful banker whose life changes drastically when he is convicted and sentenced to life imprisonment for the murder of his wife and her lover. Set in the 1940’s, the film shows how Andy, with the help of his friend Red, the prison entrepreneur, turns out to be a most unconventional prisoner Some super acting by Morgan Freeman and Tim Robbins made this one of the all time brilliant movies ever filmed. Searing, heartbreaking and stirringly directed by Frank Darbont stands tall as a story of the triumph of the human spirit.

Most memorable line: I don’t know; every man has his breaking point

8) Silence of the Lambs: Skilfully adapted from Thomas Harris’s novel by the same name starring Anthony Hopkins in a role of a lifetime and a compelling Jodie foster as the FBI agent who must track down a serial killer with the help of another. Grippingly directed and performances that stay with you long after you finished watching this is material adapted at it best. It’s a tough call between  the book and the film to decide what’s superior.

Most memorable line: A census taker once tried to test me. I ate his liver with some fava beans and a nice chianti.

9) Goodfellas: Goodfellas is based on Wiseguy, a 1990 novel by Nicholas Pileggi. The title of Pileggi’s book was changed to Goodfellas because it had already been used for a TV series. The master of crime dramas Martin Scorcese directs this riproaring saga of the mob and its colorful characters set in New York

Most memorable line: Sure, mom, I settle down with a nice girl every night, then I’m free the next morning.